The moment we have spent 50 years praying for, fasting for, fighting for, marching for, bleeding for, sweating for, and weeping for, has finally arrived. But this also means a serious hastening of the Opening of the Seals of Revelation.

The moment we have spent 50 years praying for, fasting for, fighting for, marching for, bleeding for, sweating for, and weeping for, has finally arrived.

This is cause for tremendous rejoicing, and above all, for giving prayerful thanks to Almighty God. 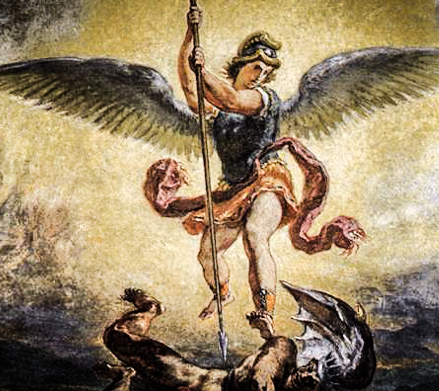 And what a fitting day for such a great victory: June 24th is usually the Feast of the Nativity of St. John the Baptist (This year, however, due to the Feast of the Sacred Heart, John’s Nativity was moved to the 23rd)

John the Baptist, as we all know, leapt in his mother’s womb upon the approach of Christ – in His own mother’s womb – when Mary came to Elizabeth at the Visitation. He thereby gave powerful testimony not only to Christ’s Divinity, but also to the sanctity of unborn children.

The Mission of John, moreover, was to herald the First Coming of Christ. And this overturning of Roe v. Wade is itself like a foretaste–a trumpeting, even–of the Second Coming of Christ in Grace, wherein the Restoration of All Things in Christ will be accomplished, and His Will shall reign on earth.

In other words, His Sacred Heart will Triumph.

His “Divine Mercy will triumph, and will be worshipped by all souls.” (St. Faustina, Divine Mercy in My Soul.) And that is today’s actual liturgical Feast this year — the Solemnity of the Sacred Heart of Jesus. The Sacred Heart of Jesus and the Immaculate Heart of Mary (tomorrow’s Feast, and deeply united with today’s) will Triumph on earth. The most important element of that Triumph is its casting into hell the so many evils that dominate the world today. And no evil is so diabolical and pervasive as abortion.

But today is also a time for a sober recognition that the Devil is going to fly into an utter rage over the humiliating defeat he just suffered.

The outlets of this rage will be numerous, but one outlet of his fury has already been made explicit: the group going by the name “Jane’s Revenge,” and other groups (e.g. “Ruth Sent Us”), who have promised vandalism and violence against the Catholic Church, the Mass, Catholic Priests, and the Faithful if and when Roe v. Wade is overturned.

I see no reason to suspect they are or were joking. Indeed, they already have vandalized numerous pro-life pregnancy centers and disrupted numerous Masses, merely due to the anticipation that Roe v. Wade would be overturned. What do you suppose they’ll do now that it actually has been?

The Seals of Revelation’s Sixth Chapter are opening before our eyes. I have written and spoken much about that these last two years. To those “professional Catholics” who despise prophecy and categorically reject any Apocalyptic considerations with catlike reflexes (and catlike critical thinking), I implore undertaking an exercise: Open Revelation 6, and write a piece of imaginative fiction describing a time in which its contents begin to be fulfilled:

Clearly we  have seen – but, still, have only seen the beginning – the global opening of the Seals 2, 3, and 4. (Seal 1, on the other hand–the rider on the White Horse–is held by Catholic Tradition to be positive–Christ conquering souls–and we have seen that these last decades in the extension of the Time of Mercy). We have also seen the opening of the Fifth Seal of Martyrdom in Africa, Asia, and the Middle East. But this Fifth Seal has only creaked open relatively lightly in the West.

I suspect that this ruling overturning Roe v Wade– though an enormous good and a great blessing in itself – will push further open (perhaps even wide open) the door to the Fifth Seal in the West, and serve as the opening event of Great Persecution prophesied for the Apocalyptic Times we are now entering.

(One example of the flyers that have been popping up everywhere)

Abortion is the greatest institutional evil in history. It is the crown jewel in the Devil’s diabolical desires for the world, and Roe v. Wade was abortion’s single biggest sustenance; at least, it was abortion’s most widely revered symbol of domination. This decision’s overturning, of course, does not end abortion, but it does signal the beginnings of the End of an Era.

The Devil knows this, and he only has so much restraint. This blow to his plans will push him past those limits. If he has held back from certain types of open persecution in certain places up until now – knowing that this tends to generate great saints – he will not be able to resist any longer.

What this demands of us, therefore, is above all a “Call for the Endurance of the Saints” – which is a repeated admonition in the Book of Revelation. A call to remain absolutely assured that God is 100% in charge, and to remain absolutely steadfast in our Faith and Trust in Him – our striving to do and live in His Will – no matter what happens.

But it is also a call to:

I made “The Vigilants” last month, inspired by the utterly catastrophic moral failure of the Uvalde Police Department, as a call to men everywhere to prepare both their bodies and their souls to always stand ready to be the Good Samaritans; no matter what the situation calls for – not standing by idly expecting official first responders to do the job demanded by the circumstances at hand.

But now I think that, although Uvalde was my immediate inspiration for starting the Vigilants, the real purpose for it in God’s plan was because of what was about to transpire in the diabolical rage against the Church that will be stirred up by Roe v. Wade’s demise – and the corresponding call of the Faithful everywhere, but men especially, to stand physically and spiritually ready for acts of heroism in defending the innocent.

If indeed groups like “Jane’s Revenge” make good on their promises to violently attack Catholic Masses throughout the nation (though we can assume, in this age wherein the entire Western World tends to move like a single piece of machinery, that this rage will not be restricted to America), then this means that men everywhere must be ready to defend not only their fellow Massgoers, but also the dignity of the Holy Sacrifice and the Real Presence of Christ in the Blessed Sacrament.

All three are even worth sacrificing our lives to defend: Innocent people indeed, but also the Sanctity of the Mass, and the Real Presence of Jesus in the Eucharist.

This is a task above all ill-suited to an unspiritual man who, attached to the things of the world and lacking zeal for and devotion in the Faith, would only seek to preserve his own life in an extraordinary situation.

But it is also a task ill-suited to a man who, even if he is capable of doing otherwise, nevertheless allows his body to become weak and incapable. Therefore:

Prepare your soul for heroism and, if needed, martyrdom.

Prepare your body to fight to defend the innocent.

Yesterday morning, I LiveStreamed my Divine Will Missionaries of Mercy walk:

I’ve been doing these walks for over 8 years (I started DWMoM itself in 2015, but started the forerunner apostolate in 2014), and it only just occurred to me to give livestreaming one walk a try. My reason for doing so was simply to show an example of what a DWMoM walk can look like, so as to clear up any mystery and illustrate just how easy it is. But a comment someone made on the YouTube video (thanks, Mary!) got me thinking: there is another, perhaps more important thing the livestream did. It enabled those who were watching, live, to pray for all those I came across just as I was doing.

Anyway, I am eager to get my reader’s input on this. I don’t want to bother my YouTube subscribers with a bunch of videos they might not be interested in, but I don’t want to pass up on what may be a great opportunity of grace, either. So if you have an opinion on this, feel free to vote in this poll: