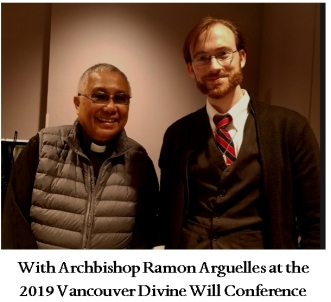 (Fore-note: The Vancouver Divine Will Conference was a blessed event; thank you to all who attended! I have posted a video of my talks on YouTube here. Archbishop Ramon Arguelles celebrated Mass for us in the morning, and then eagerly stayed for the entire event (which was fully approved by the Archdiocese, as you can see from this documentation), happy to learn more about these most sublime revelations to Luisa.)

I was just informed that a certain apologist has (just days ago) recited an article from last millennium (1998) on his “relevant radio” show, attacking Luisa’s revelations with the usual incredibly partial information, exaggeration, and out-of-context quotations. (All of these old, discredited arguments presented by Patrick, Fr. Staples, and his brother Mr. Staples, have been fully refuted in The Crown of Sanctity— published over 20 years more recently than the article Patrick read — in pages 488-526) I am not going to attack Patrick — he’s done many things that are objectively very good for the Church and I’m sure he’s a wonderful man and a wonderful Catholic. But I am going to be merciless in addressing these particular errors he promotes and in calling attention to the necessary truths he chooses to deprive his listeners of.

I’d first like to thank Mr. Madrid for his promotion of Luisa’s revelations. Patrick, of course, here presents himself as a hero of orthodoxy and thinks he is doing a wonderful job preventing the spread of Luisa’s revelations with his own attempt to overrule the Vatican and denounce what he calls Luisa’s “heresy,” “self-aggrandizement,” and “outlandish” contradiction of Catholic teaching. In fact, he is only helping Luisa’s cause — which, at this point, is harmed only by being ignored. Indeed, we have now arrived at the time in which all publicity is good publicity for Luisa, her cause, and her writings. For the truth of Jesus’ revelations to her is now so obvious that only the most willfully blind can fail to see it; and this is so above all thanks to what has transpired since the publication of the completely outdated article Patrick read. In this post, therefore — instead of repeating the refutations of the article’s fallacies, which anyone can read at the link above — I’d like to merely point out what Mr. Madrid has ignored by pretending that the article he re-read (again, from last millennium) has the last word on the matter, when in fact it should be wisely thrown in the same garbage heap as the various articles like this one that were written denouncing the “heresy” in St. Faustina’s revelations:

(Citations and more details for the above items, along with many more clear demonstrations of authenticity, may be found on pages 70-74 of The Crown of Sanctity)

Patrick might as well have published a lengthy diatribe against St. Padre Pio — considering all the controversy that surrounded this great mystic in the years before his Cause advanced, it would be easy to find plenty of “valid concerns” regarding that holy man!

Sadly, this is no mere excusable misstep from Mr. Madrid. Despite being repeatedly informed of the truth, he systematically ignores the facts (which are apparently a little too relevant for “relevant” radio!), and has been doing so for decades. My first run in with him was about a decade ago on Facebook: after pointing out just how contradictory his teachings were on private revelation (like many career lay apologists, he has long been a promoter of the “whatever floats your boat” approach to private revelation, which I addressed on pages 48-53 of The Crown of Sanctity), he called all of my examples that demonstrated my point “irrelevant hypotheticals” (they were actually taken directly from Church History) and, instead of addressing them, said I was just “throwing dust in the air.” He then selectively deleted my posts so that it looked, to his readers, like he won the argument, and then proceeded to block me from his Facebook account so I could no longer see what he wrote or post any further to defend myself. I would have been more than happy to have never even mentioned this again, were it not for the fact that he rejected my repeated and sincere attempts thereafter to be reconciled.

I say this not to dwell on past injustices– as far as I’m concerned, it’s water under the bridge — but rather to encourage others to learn from my experiences and realize that there is no use holding their breath and waiting for the usual critics to wake up. This is, I am afraid, their modus operandi. It’s time, instead, to move on from regarding them as voices worthy of being heeded in these most confusing times the Church is enduring. The Age of Apologetics is over. It is now the Age of Witnesses and of Revelations. Don’t get me wrong; we must indeed defend the Faith and, as 1 Peter 3:15 admonishes, be prepared to give reasons for our hope. That is why I wrote pages 24-47 in The Crown of Sanctity. But we ought no longer treat these defenses themselves as the objects of our hope and zeal, for God is now offering something so much greater; and just as my son’s zeal for plastic toy hammers decreased once I let him use a power drill, so too our focus, as Catholics, should now shift to heeding the glorious invitations that Heaven itself is offering to the Faithful (even though, unsurprisingly, many of those whose job has long been promoting the toy hammers oppose the shift of focus).

Indeed, so many in the Church today who do all sorts of externally good things in fact treat Heaven’s direct intervention in the world as competition for their own “apostolates” (that is, businesses). I cannot read anyone’s heart, but I do know this much for certain: the very Pharisees who committed the Deicide had many objectively good and holy things on their spiritual résumés — written and spoken defenses of the truths of Judaism, critiques of the errors of the Pagan societies that surrounded them, etc. But objectively pious deeds count for absolutely nothing if one chooses to set himself up against the Will of God — a Will which takes no heed of whether some small minds have deemed Its own operation scandalous.