Upon hearing today’s Gospel proclaimed at Mass this morning, an understanding of its meaning that I have never before considered flew into my mind without invitation.

Doubtless, we have all heard more homilies and read more articles than we can count expounding upon this parable as an exhortation to trust in God’s Mercy; and that is a good thing, as Divine Mercy is certainly the main theme of the parable.

But a deeper exhortation lies within the juxtaposition of two simple and overlooked statements made by the elder brother and the father:

Notwithstanding how heroic the father in the parable indeed is, we must not be too afraid to admit that it is rather sad that this elder brother, who apparently always served his father and never once disobeyed him, was never given so much as a young goat to feast on with his friends (we must always assume, unless the parable itself indicates otherwise, that the words spoken by the characters within it are true). I suspect that most who first hear this parable do feel some sympathy for the elder brother precisely because of this feast-absence in his life, but quickly shrug it off, fearing it may be an impious sympathy. 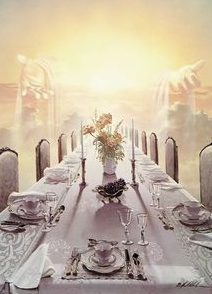 Because the elder brother never asked.

“How many gifts do We want to give! But because they are not asked for, We retain them within Ourselves, waiting to give them when they are asked for.”

Longtime readers of my blog, no doubt, already can guess exactly what I’m going to do next: issue yet another exhortation to ask God for the Gift of Living in the Divine Will. And if that’s what you guessed, you’re right.

Simply say, with sincerity, and so repeatedly that God can no longer listen to your plea without granting it:

“Jesus, I trust in You. Thy Will be done. I give you my will, please give me Yours in return.”

But, in fact, I want to leave Luisa’s revelations aside for a moment and simply issue an exhortation to all the Faithful — whether they have heard of Luisa or not, whether they believe in her revelations or not — to pause and ponder why they have not asked God for union with Him in the highest possible degree.

Why, dear soul, would you possibly not ask for that?

Such a soul reminds me of a cowardly young man who, year after year, fails to propose to the young lady he is courting even when that is clearly the called-for course of action.

What is he afraid of?

That she’ll say no? She would have dumped him long ago if she was going to say no.

That he’ll have to give up his “freedom” to do things he did in his single days? He already gave up those pathetic “freedoms” by entering into courtship anyway, and those “freedoms” aren’t worth batting an eyelash over losing.

That he might be able to find someone “better” down the line? There’s no such thing as a “better” plan than God’s plan — and if God has made His will clear in the courtship then it is absurd to wait for something “better” down the road.

Someone needs to come along and strongly admonish this young man to fish or cut bait (or perhaps so admonish using an even more pointed expression regarding the need to not linger in the bathroom… a phrase I will refrain from writing here for the sake of keeping it clean!)

What is more, none of these concerns are valid when we step out of the analogy and consider God Himself.

God will not say no. He wants union with you even more than you — in your best moments — want union with Him.

God will never diminish your authentic freedom — union with Him only ever increases it and causes you to be a more flourishing and fully alive individual than you ever would have been without union with Him (or with a lesser degree of union with Him). If you’re already following the Commandments, believing the Dogmas, etc. — in a word, doing what you must do to be in a state of grace –, then you are already in the “courtship” phase with God anyway, and you already have the “prerequisites” needed to receive the highest union with Him (and if you’re not in a state of grace, I am not addressing this post to you — I’d instead ask you to go to www.PrepareToSeeHim.org)

God’s very life as your own life will never be eclipsed by some still-better offer out there waiting to be discovered. What exactly, pray tell, could possibly come down the line in the future for you that, in having union with God, you will have to reject? A moment’s reflection will make you realize that it is only things that you have no moral right desiring in the first place, and sealing your life off to ever fulfilling these lowly desires is nothing to lament.

God has been begging us, for over a century now, to ask Him for His life as our own life. He has revealed to so many authentic mystics that this is indeed His Will for us — in this age where “sin abounds,” so that “grace may abound all the more” (cf. Romans 5:20), for He “saves the best wine for last” (cf. John 2:10). In this age where the foundation for the Crown of Sanctity has finally been fully laid through the teachings (see pages 115-145 of The Crown of Sanctity or, more briefly, pages 68-73 of The Crown of History) of the Fathers of the Church on Divinization, the Doctors of the Church on Mystical Marriage, the Spiritual Masters of Sacred Tradition on the Union of Wills, and the great Marian Saints on Marian Consecration. In this age when, after 2,000 years of praying the Our Father, its central and greatest petition is almost ready to be fulfilled — Thy Will be done on earth as It is in Heaven.

In this age where God has explicitly made the request through prophet after prophet:

There simply is no longer any doubt about it. So why aren’t we asking Him? Why do we Catholics incessantly insist upon Protestantizing ourselves; pretending that “a personal relationship with Jesus” is enough — as if our union with Him need not be fundamentally different than our union with close friends — when He wants infinitely more of us than a mere relationship (no matter how “personal”)? Why do we dabble in sanctity while resisting the very crown that sanctity itself has always been intrinsically ordered towards, even when it is freely offered to us?

Why are we being like that cowardly young man who is wasting away his life on mere courtship?

Why don’t we love God enough to believe what He is saying and take Him up on this unbeatable offer?

Don’t be like the elder brother who went about his whole life failing to ask for what his father would have readily given if he had just asked. Don’t go your whole life living so far below your calling (I solemnly assure you that you are called to the highest union with God possible) because of fears, or trifles, or quibbles, or sloth, or attachments, or whatever else.

(And you shall receive.)

I’m placing today’s announcements at the bottom of the post: